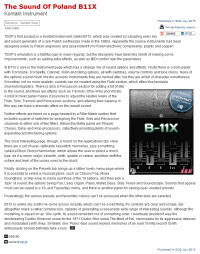 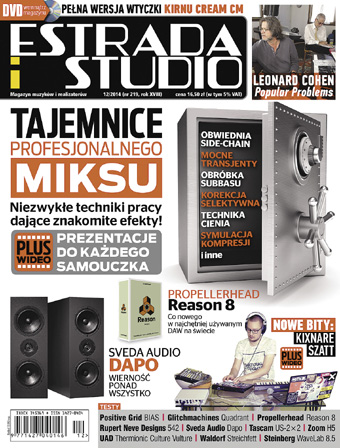 " (...) as a result we get entirely Polish product having the sound that is difficult to mimic using popular synthesizers."

The Sound Of Poland Login/Logout

B-11X is a unique combination of vintage sound of Polish electronic organ, modern sampling technique and synthesis packed into a full-featured virtual instrument software for NI Kontakt. In Poland of the 80's, few musicians have the privilege to earn their own living just by playing rock music, the vast majority rather had to put their own money to keep bands working. Playing for fee was a very rare opportunity at the time, so we had to cope in different ways. Apart from working for P.A. and amplification equipment producer, I frequently played my favourite instruments during so-called 'accompanying events' (just like many of my music-mates), which is simply a substitute saying for ordinary wedding or dancing parties. In those times, you had a little choice of electronic keyboards suitable for that kind of job, limited in fact to  a Vermona organ (usually Piano-String or Formation) or - more frequently - to Polish electronic keyboards from the B-series designed and developed by the Unitra-Eltra company located in the city of Bydgoszcz (don't even try to pronounce (translator's note)). Those devices were almost always accompanied by stage amplifiers like Eltron, Contra, Gran or Vermona. Looking at my oldest photographs, I can often see a B-1. However, around the middle 80's, many keyboard players switched to B-11s - new instruments with plastic front panel and those famous sliders which we thought were purposefully designed to break down at crucial moments, make noise and cracks. I still have that sound in my mind, as well as on some accidental recordings, and it still reminds me of the 'accompanying events'...
But, it turns out that using modern technology it became possible to give the instrument a new life, at the same time preserving all retro sound qualities of the genuine device within the reshaped incarnation. This is what Polish company ULTREC did with B-11X. The idea of putting an old virtual polish analog to the crowded audio market may seem very bold, but it really makes sense if you think of virtual Korgs, Moogs, Rolands, ARPs, etc.. You can hear them on countless records, played by countless musicians. If you look from that perspetive at the genuine B-11, originally made up of what was at hand, it really feels like a breath of fresh air. Well, just another paradox of our history... Some thirty years ago, we would probably die for a new Yamaha DX-7, and readily abandon the heavy and always-out-of-tune B-11s. But now, the virtual version of classic Polish analog device proves otherwise, offering the fresh, inspiring, extraordinary sounds that fit almost every modern music genre, and stay distinct.

I must say here, how I deeply appreciate the work of designers and electronic engineers of vintage Polish analog equipment. They were real experts,  paying attention to smallest details, who often worked against adversities and created numerous, well designed and robustly build devices. It is quite obvious, they sometimes drew ideas from so called 'western stuff', however, they really did great jobs, which everyone who had ever compared Eltron 30 or 60 to currently build equipment has to admit. Redundant transformers, firmly mounted capacitors, stiff and durable chassis, accurately routed grounding circuits, and so on - a clear evidence of professionalism, no sign of sloppy work. Unfortunately, they faced typical problems including general lack of reasonable quality electronic parts at the first place. The technological embargo imposed on Poland in response to proclamation of The State of War in 1981 resulted in destructive technological isolation from quickly expanding electronic markets. Looking back from today's perspective, I see constructive ideas and positive attitude manifested by 'common Poles', which were later blown out by the inevitable 'Wind of Change', and largely were lost for ever. Luckily, there are people who try to restore some ideas in our digital world.

Those, who are familiar with classic synthesizers and don't know the genuine B-11 may feel startled using B-11X for the first time. It offers numerous, good sounding factory presets out of the box, which demonstrate its applicability to various styles. Original retro generators serves mostly as a basis to create absolutely unique an rich timbres. However, I strongly suggest to switch-off all additional effects to hear raw sounds of transistors and integrated circuits. Those coarse and sometimes irritating timbres reveal a new musical space which is almost completely unknown. Carefully chosen effects and filters prove good sense of contemporary trends among B-11X designers. They did not only try to 'modernize' just to match the competition, but created a vision of how B-11 might sound like after years of continuous production and subsequent improvements. B-11's sound itself simply cannot be modernized without loosing its charm. Moreover, the virtual replica costs less than used original analogs, which can rarely be found on Intenet auctions, almost always in bad shape. From every perspective, the B-11X seems a very well designed, well programmed and great sounding virtual instrument. It have been presented by some musicians that you can get very interesting musical results just from using rare Polish instruments, which in fact we are obliged to save from oblivion. Now we can easily apply 'the doped B-11' to almost every musical genre, starting from carefully designed factory presets and ending up on custom sounds, and full compatibility with common DAWs. This is the first product of The Sound of Poland, and we are now waiting next.